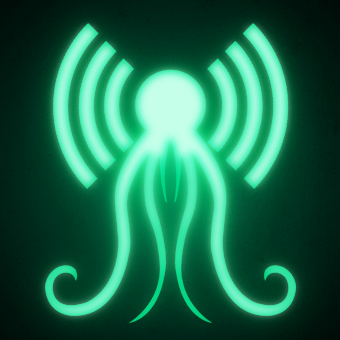 *Note: I actually wrote the first part of this entry a little over two years ago for another blog. But I still love this podcast, I still want to promote it, and there’s new information to provide. So, full disclosure of my self-plagiarism aside, here we go:

It would appear that I’m a late-comer to the H.P. Lovecraft party. I had previously heard things described as Lovecraftian and had some vague notions of what some of his work was about, but I had never previously delved into his stories. And then I stumbled across this podcast a couple of years ago.

Despite it’s rather lofty sounding title, this is an extremely fun podcast hosted by the dynamic duo of Chad Fifer and Chris Lackey. Their friendly chemistry, witty banter and obvious love for the material make each episode a delight to listen to. And perhaps best of all, they aren’t Lovecraft apologists so they are just as likely to poke fun at portions of the works when they deserve it as they are to gush over the great parts.

Each episode, our intrepid hosts lead us chronologically through one (or more… or less) of Lovecraft’s tales, accompanied by excerpts read by guests, as well as some backstory. Between the musical accompaniment, the fantastic guest readers and the high quality recording equipment I assume they use, they do a tremendous job of creating an engrossing audio experience. My only regret is that each episode is generally only 30 minutes long (and most feel like only 5 minutes). And, after following the show for nearly two years, I’m not looking forward to the inevitable end of Lovecraft material for them to work through.

Do yourself, and Mr. Fifer and Mr. Lackey, a favor and go to hppodcraft.com or find them on iTunes and download every episode. As a bonus, grab their full story readings from their site. You will not be disappointed. And as an extra extra bonus, enjoy these other works by the very creative duo: The Ward (a pilot for a thriller-comedy series that, unfortunately, never made it to t.v.) and The Investigators (a short animated series)(or scroll to the bottom of this page to watch the embedded videos).

*Now, for the new material:

Yes, as stated above, there was an inevitable end to the Lovecraft material. But undaunted by circumstance, Misters Fifer and Lackey persevered by digging into Lovecraft’s essay “Supernatural Horror in Literature”, in which the writer name drops a lot of works by other authors that influenced him. Using this as their guide, the podcast now covers those works in much the same way that they covered Mr. Lovecraft’s. The show is still fantastic.

However, they have now moved to a premium model under the company name Witch House Media, asking $6.66 for a three month period (a perfectly reasonable price as far as I’m concerned, but you and I are not the same person so your reaction might differ).

The first episode of the month is provided free and they also provide snippets of the all the others for free. And don’t fear, you can still access all of their Lovecraft episodes for free.

**While not necessarily “kid-friendly” due to the subject matter, the podcast is still mostly family friendly with no explicit language**